Evidence for the Global Flood

After the Creation, the Flood is the next historical event that is often mocked by scoffers. These scoffers have to deny the flood and do so vehemently, because accepting this historical event as true might lead to the logical conclusion that a God rules this universe and has power to deliver righteous judgment to the wicked. God will not be mocked.

Genesis 6-7 describes how God saw that there was nothing but evil in the heart of man and it grieved God that he had created man. However Noah found grace in the eyes of God, along with his family of seven. Two of every kind of the unclean land dwelling air breathing animals, and seven male and female couples of every clean land dwelling air breathing kind, were saved on the ark from global destruction.

Let us first start with the math

A kind is closer to the family level of the biological classification system with exceptions, to be on the safe side and to give scoffers a chance we will use the Genus level for our calculations.  The dog Kind can bring forth a wide variety of dogs from wolves to the Chihuahua from an originally much larger gene pool.

There are about 8,000 genera including extinct genera that would have to be saved according to these criteria.  God would have been smart enough to send younger and thus smaller representatives of the kinds. The median size of these animals would likely have been the size of a small rat with about 11% of these animals being larger than a sheep. I will be generous and round the size of the animals up to the size of a sheep. The 8,000 genera which is already  generous considering a kind is closer to a family than a genus, equates to roughly 16,000 animals plus additional couples of clean animals. To be generous with our figures again we will round the total of animals up to 30,000.

Now that we have established that Noah could have successfully carried out God’s orders and saved the animals; let us have a look at a small sample of the multitude of evidence that supports a global flood.

The Layers of sediments

On earth we find multiple layers of sediments. The average atheist believes that these layers formed over millions of years (uniformitarianism).

Under a biblical model, these layers would have formed during the year long flood (catastrophism).

Take a jar of water, add sediments and shake. A hydrological sorting process will take place where layers are formed.

In moving water multiple layers form simultaneously with the current. Under water landslides are called turbidity currents and can cause enormous damage. In 1929, the trans-Atlantic cable was cut by one of these underwater landslides moving at 112.65km per hour (70mph) covering 64,374km2 (40,000miles2). 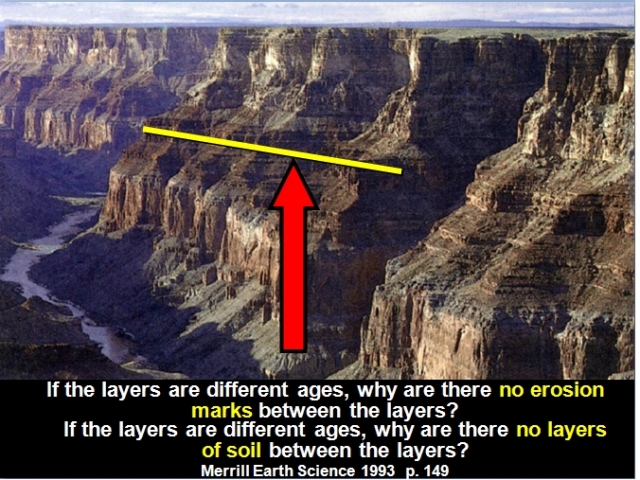 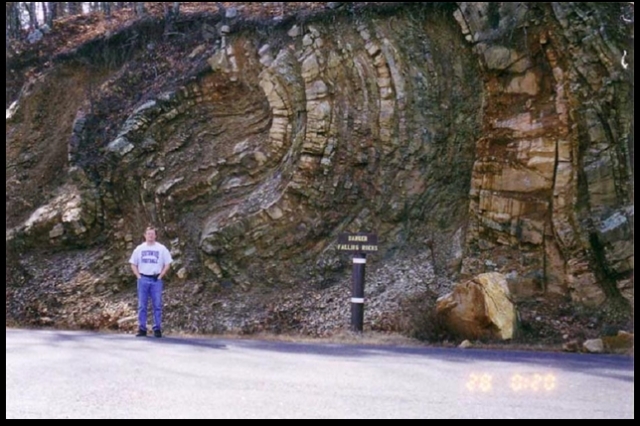 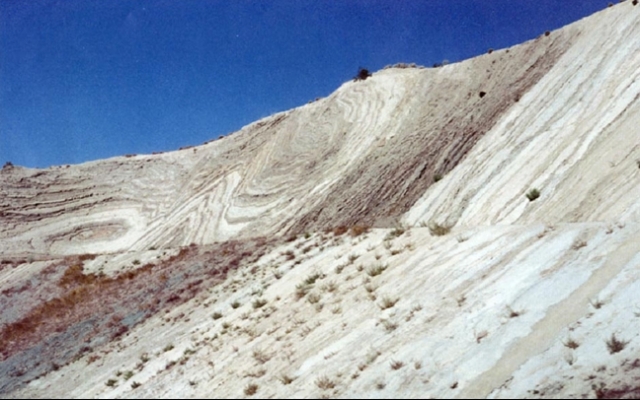 Sedimentary layers would need to be soft while bending occurred. If each layer had been hardened over millions of years it would have shattered under the pressure of bending as hard sedimentary layers are brittle. This is evidence that these layers where laid down rapidly during a flood while they were still soft.

Petrified trees in the upright position connecting multiple layers of rocks (polystrate fossils) have been found by the thousands. 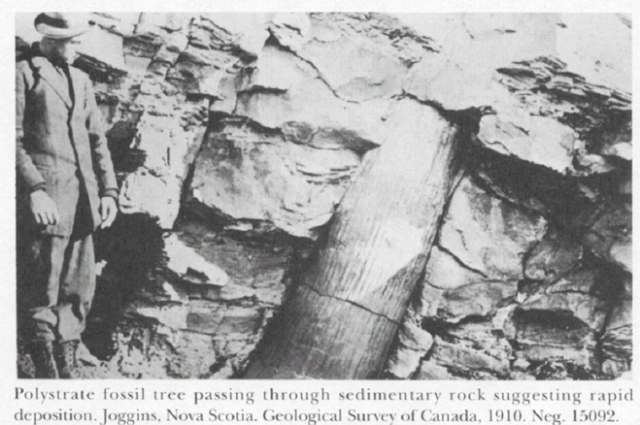 The Fountains of the deep

In the six hundredth year of Noah’s life, in the second month, the seventeenth day of the month, the same day were all the fountains of the great deep broken up, and the windows of heaven were opened. And the rain was upon the earth forty days and forty nights. Genesis 7:11-12 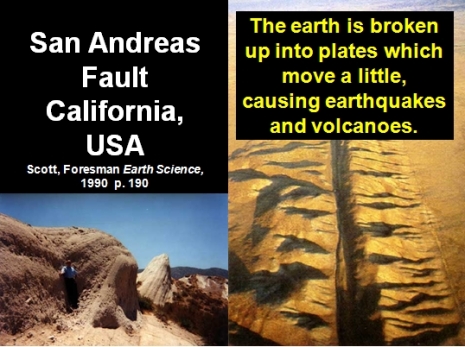 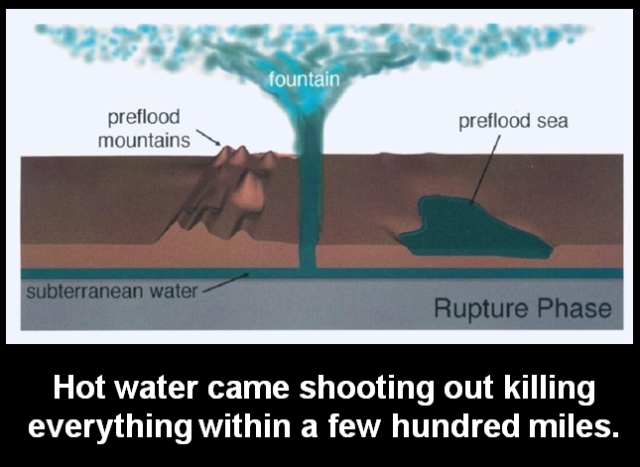 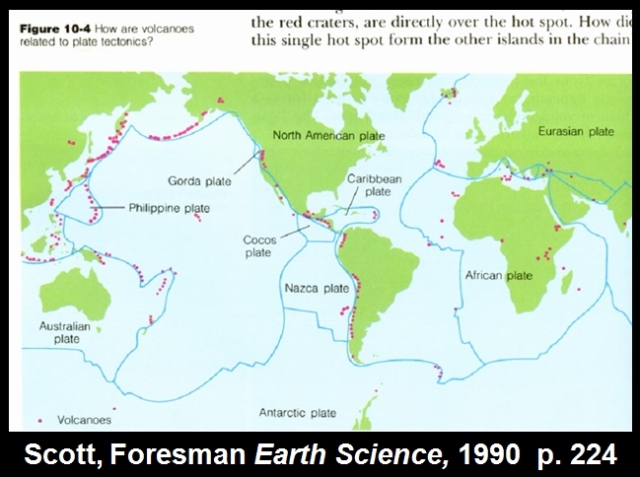 An interesting point to mention in support of underground water, up to 70% of the emissions from volcanoes consists of steam (water vapor).

Hast thou entered into the springs of the sea? Job 38:16 – Only discovered recently in 1977 by “modern science” that there are hydrothermal vents on the ocean floor.

The fact that we find so many fossils on earth is evidence for a flood. Per-mineralization (fossilization) occurs when an animal is buried rapidly.

Astonishing evidence in support for the flood is the fact fossilized marine life is found in some of the highest regions above sea level. 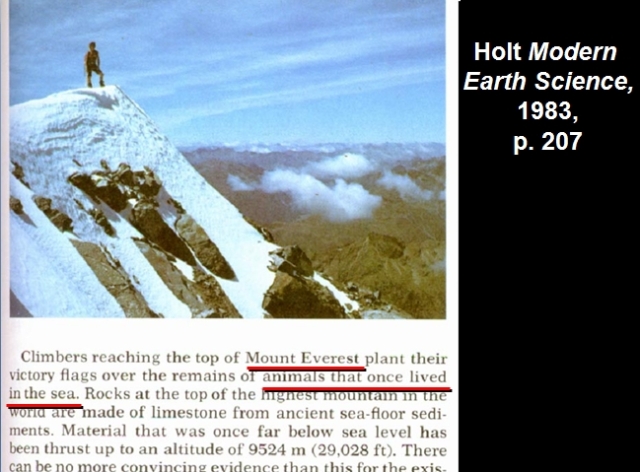 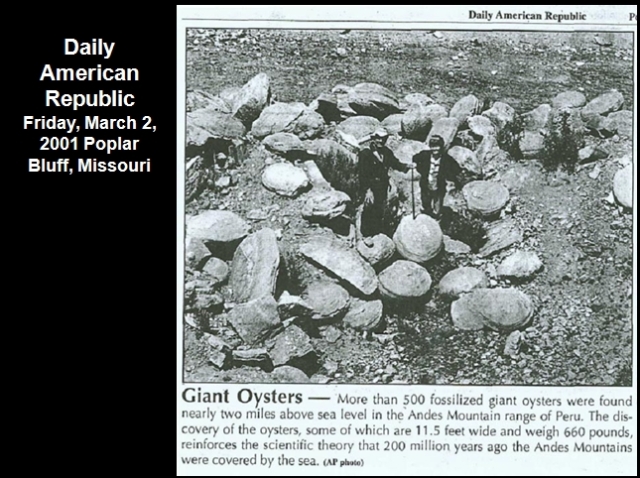 Clams open when they die, fossilized clams in the closed position should raise questions. Something extraordinary must have occurred here as the fossils from the flood consistently demonstrate they died in fear. These clams are discovered with both halves tightly shut, this is a defensive response for protection from danger when alive. Fossilized dinosaurs consistently demonstrate body language that would indicate asphyxiation as the cause of death which could be achieved by rapid burial while the dinosaur is alive, or drowning.

Where did the water go?

The mountain ranges were pushed up by earth movements to their present high elevations at the end of the Flood. This caused the water to settle where the earth’s crust is thin as the weight would result in buckling of the crust. Continental crust is not as dense as the ocean floor causing it to float above the mantle. The end result is a planet covered by over 70%water, canyons and mass erosion seen below. 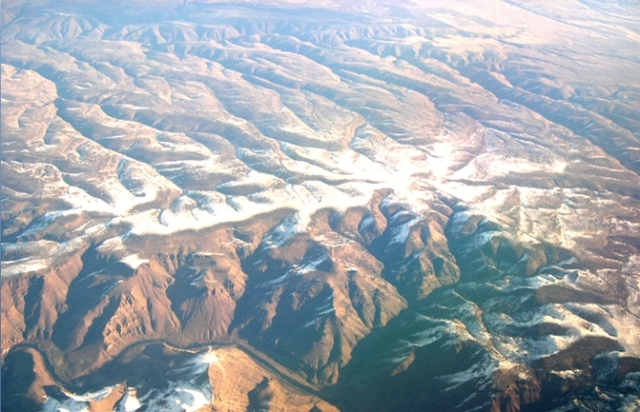 There is much additional evidences not mentioned, flood myths from all over the world, how the Chinese language demonstrates a historical understanding of this flood, under water cities that have been discovered for example.

The Bible records in 2 Peter 3:3-6 a prophecy about these scoffers

Knowing this first, that there shall come in the last days scoffers, walking after their own lusts, and saying, where is the promise of his coming? (Jesus (Hebrew = Yeshua)) For since the fathers fell asleep, all things continue as they were from the beginning of the creation (Uniformitarianism). For this they willingly are ignorant of, that by the word of God the heavens were of old, and the earth standing out of the water and in the water: Whereby the world that then was, being overflowed with water, perished (The Global Flood).

But the heavens and the earth, which are now, by the same word are kept in store, reserved unto fire against the day of judgment and perdition of ungodly men. 2 Peter 3:7

A Defence of the Bible 2nd edn by Dr Gary J Baxter.